I will try to post tomorrow about staying sober at Burning Man. But first I need to post about my small meltdown today. Or maybe it was a major meltdown.

As I was packing up to leave the festival last night,  I had a small meltdown. My camp told me we would all have a spaghetti dinner. I told them I had some cheese for it. I was looking forward to it. But as I was breaking down my tent and area, I went to the common area to borrow a tool and everyone was gone. There was an empty pot with some noodles left. They all ate dinner, did not invite me, and then went off to see the Temple Burn. I got very upset. I felt excluded. Unwanted. Lonely. I began to rush my breakdown to be finished before they got back. I cried as I pulled things apart and folded up my stuff.

I got on the road a little after 9pm. (My camp did return just in time for me to say goodbye.) I have never left on Sunday night before and haven’t sat in the traffic leaving the playa in many years. So I found the three hour wait to get out of the city very frustrating.  On top on feeling lonely and angry, I was also starting to get tired. Even after leaving the city and getting on the highway, the traffic was slow. I pulled over to sleep. I did not have much room in my car but I had enough. I slept until 8:30am today.

I felt much better this morning. I stopped for breakfast.  I started to write my blog about the event. I was also reading Facebook.  An aquaintance posted she had a room available in Reno for that night.  I thought it sounded like a good deal. We messaged about it and I sent money via PayPal to her friend. She told me she would have keys waiting with my name.

When I arrived at the hotel hours later, the front desk was busy. A lot of people were checking in. I asked about a key being left in my name but the manager told me my name was not listed on the room. I reread the email and noticed message said the keys would be at the bell desk. I walked there but there was no one manning the desk. I could feel myself getting upset. Tears began to form in my eyes. A hotel guest came to ask if I was okay and if she could help. My response: “Unless you work the bell desk, I doubt it.”

The bell desk guy finally appeared. There was an envelope waiting with my name. I was still teary-eyed as I carried my bags to the room. But when I got there, the keys didn’t work. I began to get more upset. I messaged the girl and asked her for the name the room is under. I explained the keys are not working. I began to message her every ten minutes with no response.

Then I began to really panic. I began to think I was scammed. I do not know this woman well. I messaged her I wanted my money back. I wanted a shower. I wanted sleep. I was not sure if I should go book another room or keep waiting for a response from her. I went around Reno to get things cleaned and run post-Burn errands. I kept breaking out with deep sobs. I was crying hard at red lights. I was bawling in bathroom stalls. I was acting like the world was ending. I couldn’t stop crying.  I told her if I didn’t hear from her soon I might have a panic attack.

I kept thinking I needed a beer. I wanted to sit in one of the casinos and just get drunk. I wanted to get trashed and forget the pain I was feeling. I was mad at myself for trusting. I was thinking of all the things wrong with me. I wanted to just give up this sobriety thing and go numb.

Two and half hours after I first arrived at the hotel, she messaged me. She met me at the front desk. I was still crying. She apologized profusely and we got the key working. I kept apologizing to her for my overreaction.  I blamed it on post-Burn blues and tiredness. But I really felt I was having a depressive, panic attack.

She left some things in the room for me. Some good shampoo.  New soap. And two beers. They were IPAs. My favorite beer. She said “go shower. Have the beers. Get real food.  I am sure you will feel better.”

I thought about it. I thought a lot about it. I envisioned the taste of those beers. Just two. I would get tipsy. Not drunk. I needed the beers after a chaotic, emotional day. I did not need to tell anyone. I could drink both and no one would every know.

Instead, I dumped them down the drain. I felt I couldn’t trust myself with them in the room. I showered and cleaned up. Now I am going to bed.

I regret the messages I sent the woman. I regret the harsh words to the hotel guest that offered to help me. I regret so much about my response. I wish I was not so emotionally fragile. Can I prevent my reactions ? Should I go on medication? I really need to start seeing a therapist when I get home. 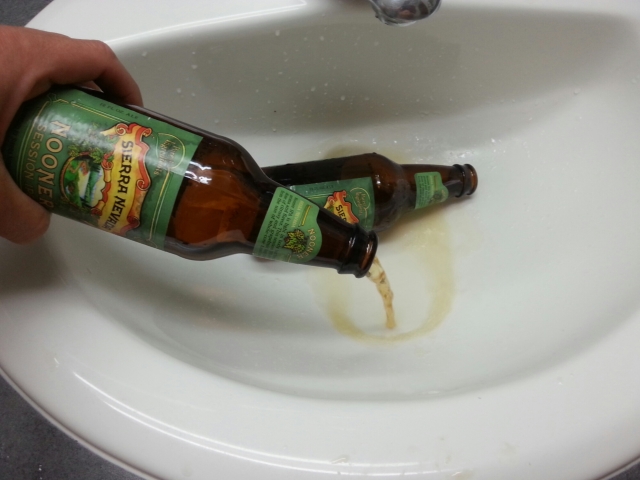