I am on a small trip right now up north. And as I drive, I keep seeing “moose crossing” signs. And not just crossing but signs with big letters “ATTENTION” written in red at top. Then it would say for “next 7” or 10 miles. As soon as I see the signs, I expect a moose to be right behind it. Sort of waving to me. Like the moose from Wally World in National Lampoons Vacation. I slow down and get scared one will jump out. I deathgrip the steering wheel ready to quick turn in case one appears. I have my foot ready to jerk the brake. I keep scanning both sides of the roads while still staring straight ahead to keep my car straight as possible.

It reminded me of drunk driving.

Every shadow or boulder I saw on the sides I thought was a moose. As if it was a cop waiting to catch me. I was scared of swerving and scared one wrong move would be fatal. I wouldn’t even change the radio stations from fear of my eye being off the road one second. Those ATTENTION  signs might as well said “SOBRIETY CHECKPOINT”. 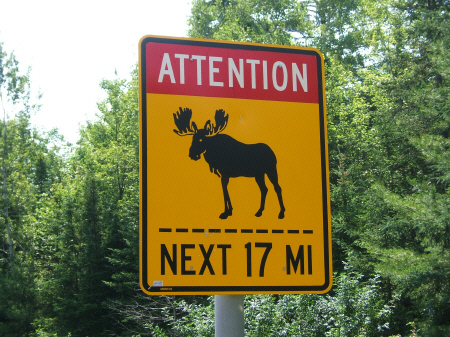 I also saw a sign about how strict this state is with drunk drivers. How could anyone even think of driving drunk with moose jumping out all the time! Do they train the moose to jump out in front of drunk drivers more? Maybe have the bars offer customers moose rides home if they are too intoxicated to drive.

Wow I really am thinking of mooses like the one from Wally World. 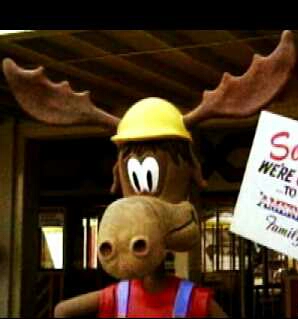 I arrived at my hotel late. The kitchen was closing. The receptionist gave me directions to downtown and said I can find a place for a late dinner there. I parked downtown and searched Yelp for reviews. Every place that I walked to was closing their kitchen as I arrived. I was welcomed to come in for a drink. Most of the late night places were crowded, loud bars. I finally food the only late night restaurant/bar with a patio. A patio meant I wasn’t trapped inside with the beer stench.

I am going back to the hotel right after I eat to get to bed early. I have a waterfront view. I hope to get up for sunrise. One of the benefits of not worrying about hangovers in the morning.

Mistake 153- I met a guy briefly in my city that was traveling the US. He was from Europe. A week later, he invited me to fly up to meet him in another city and he would drive me home in his rental car. It would be a quick roadtrip and I would get to visit places I have never seen. We would stop in one tourist town for a night and since I bought the flight, he would pay for a hotel room for us to share. I thought it sounded fun.

As soon as I arrived, I could sense he liked me. But I was not attracted to him. We did not have much in common. He was a baker and for some reason that made me think of the Pillsbury Doughboy when I looked at him. I was nice to him but I was not good with being firm. I might have gave him mixed signals. I also think that due to my low self-esteem, I savored any guy finding me attractive. So maybe I flirted a little.

We had a good day in the town. We went out for dinner on the waterfront. We had a bottle of wine with dinner. Then we went to a bar to play pool. We drank a lot and I kept ordering shots. Red-headed sluts.  It was one of my favorite shots even though I did not like Jaeger.  I knew he was flirting and coming on to me. I don’t know why I wasn’t honest or why I lead him on. I should have not drank that much but I kept the shots coming.

We got drunk and had sex. I do not remember anything about the sex. I just remember waking up the next day loathing myself. It was like I knew a car wreck was going to happen and I did nothing to stop it. He was in a very chipper mood. I felt disgusting. And I took out my revulsion on him. I was quite a bitch to him to whole 5 hour drive back to my city.

That was not the last time I saw him nor the last mistake involving him. But it was the only time we ever had sex.